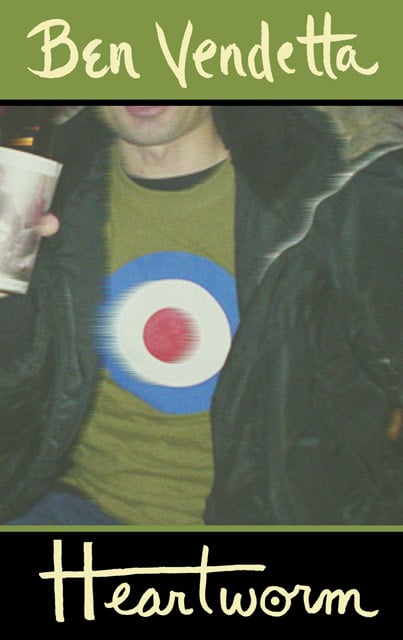 Britpop, booze, cults, and a questionable Chinese restaurant bar? It's 1995 and small-time music critic Drew has a desire for destruction. While championing an underdog Irish band, Whipping Boy, he embarks on a voyage of sex and drugs from Boston to Belfast while burying memories of his estranged wife - who is now in danger. His life was once saved by rock 'n' roll, but it may be too late for redemption in the last days of the music industry before the bubble bursts. Whether dropped by your record label or dropped by a lover-these situations call for a drink.

Vendetta’s strengths as a writer don’t just include an encyclopaedic knowledge of ’80s and ’90s UK indie/shoegaze/Britpop, but also an ability to cultivate sentences and paragraphs that make it almost impossible to put this book down.

Vendetta is obviously a serious indie fan and, in amidst all the Blur, Oasis and Verve references, the pages of this enjoyably witty and fast paced novel are littered with the names of relatively obscure bands that you’ve probably forgotten – Lush, Auteurs, Ultra Vivid Scene, cast, etc. Immediately after finishing Heartworm, this reviewer spent several hours revisiting the ’90s on YouTube.

Heartworm will make you nostalgic for the mid-1990s Brit-rock scene – even if you never lived through the era. But this is no moody walk down memory lane. The second book in Vendetta’s trilogy about rock journalist Drew is a moving and often very funny look at growing older, sometimes not so gracefully, as the post-college years turn into adulthood. And, it comes with a great soundtrack, from the Jesus and Mary Chain to Oasis to Whipping Boy.

Heartworm is a ‘Less Than Zero’ for the pre-Britpop indie generation, with its use of real-life indie music figures. There are also echoes of ‘Catcher In the Rye’. I ploughed through this novel in two sittings…

-- Nathan O’Hagan, author of The World Is {Not} A Cold, Dead Place and Out of the City

In Heartworm Vendetta has done another terrific job of keeping readers eyes glued to the pages. It was a real page turner that I honestly had a hard time putting down (it didn’t hurt that plenty o’ cool bands were mentioned on nearly every page) so this book will appeal to music geeks like myself as well as folks who like a good love story.