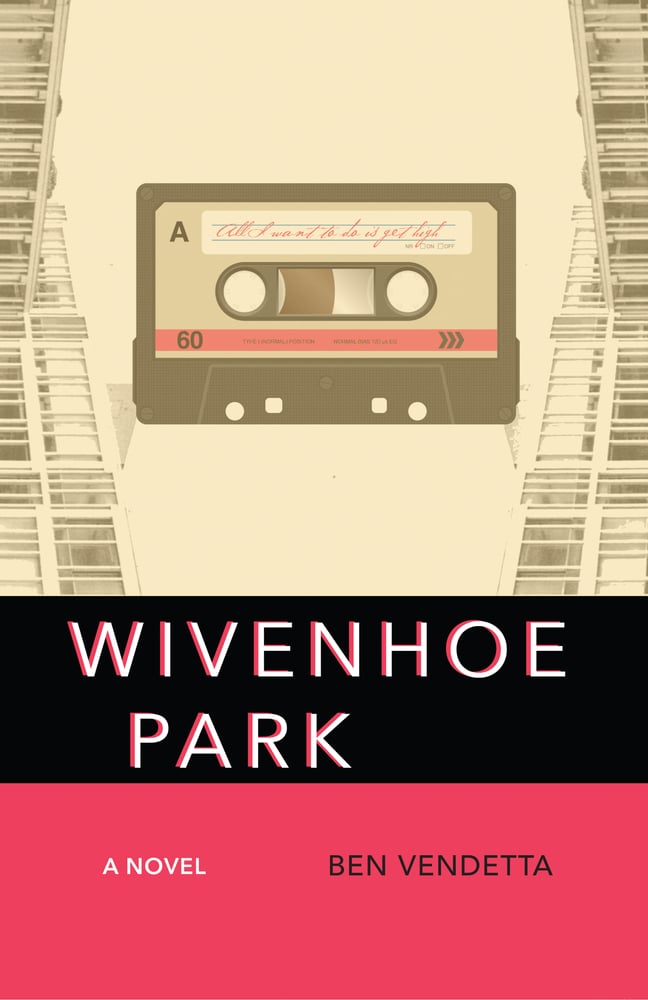 Set in the mid-1980s, Wivenhoe Park chronicles the adventures of Drew, a former track star turned pill popping, dope smoking, heavy drinking, rock 'n' roll-obsessed student with writing aspirations. Drew moves to England on a whim to escape various demons, such as a goth ex-girlfriend he can't seem to shake out of his system. Experiencing the ascent of a new indie music scene including The Smiths, Jesus and Mary Chain, and Primal Scream, he befriends a cast of characters, including a star Melody Maker journalist, a smooth mod from New York City, and several enticing British girls. Will Drew find peace, love and understanding or will it all burn down like cigarettes?

A blast from the post-punk past that brings back mid-Eighties Britain in one wired, synaptic rush, a coming-of-age story that is as poignant, political, hormonal and hilarious as the sounds it celebrates.

Forget the Great American Novel: what people really want is great rock & roll fiction. It’s just a shame it seems such a difficult thing to do. Bless your musical stars, then, for Wivenhoe Park by Ben Vendetta. Wivenhoe Park is an autobiographical novel that deals with an American who decides to study in England in order to witness what turn out to be the heyday of indie music. The real protagonist, in fact, is the music, and the book celebrates the scene from the chapter headings right down to its soul. It’s an addictive read, an affirmative and faithful story of sex, drugs and rock & roll. Where an equivalent novel such as Nick Hornby’s High Fidelity becomes evermore unrealistic to get to its happy ending, Wivenhoe Park retains a believable optimism through sheer faith in rock & roll.

Like Easton Ellis with more heart, Wivenhoe Park is a novel for everyone who proudly wore their obscure band T-shirts for the world to see.

-- Nathan O’Hagan, author of The World Is {Not} A Cold, Dead Place and Out of the City

I enjoyed Wivenhoe Park thoroughly. Ben Vendetta captures the youth feel and mood of those times quite vividly. His description of an embryonic Primal Scream gig is bang on; people always skip over that period of the band when they were most interesting and unpredictable. Cool that Meat Whiplash get a mention also, a defining Creation moment for sure.

-- Sam Knee, author of A Scene In Between

This is classic coming of age stuff. Drew makes friends, hangs out with bands, dates inappropriate girls, takes drugs and whole lot more. But what makes Wivenhoe Park such a joy is that Ben writes in a very engaging way … If you ever enjoyed High Fidelity, went to a British University in the mid 80s or are counting the days until Cherry Red reissues the legendary C86 compilation (as a two disc set!) you’ll love this.

What a fun novel with sneaky depth. BT’s own Vendetta brings back an ’80s era when a stunning, now-legendary post-punk/indie rock scene was blazing in Britain, yet this time, unlike with punk rock, a smaller slice of Americans followed its brilliance. He slyly evokes this in a coming-of-college-age story of throwing off the influence (and snares) of normal Middle American life by instead immersing himself into the thick of the NME/Melody Maker/Sounds-fed maelstrom in England itself (while seeing a bit of the continent). The scenes of hot concerts, encountering the new albums, and meeting key players such as Creation Records impresario Alan McGee are as vivid as the romantic angst of an early 20-something negotiating the love/sex conundrum and the constant worrying about identity and career—it’s all as funny as thoughtful. And I didn’t see the ending coming, either.

If you were a post-punk kid growing up in the suburban Midwest in the ‘80s (only one or two per town, please), London was your Mecca. Not all of us made the trip that decade, but Ben Vendetta did. Now he’s transformed the gritty details of his study abroad into an essential coming-of-age tale, sprinting through the experience band by band, pint by pint, shag by shag, morning after by morning after. If director John Hughes were still alive… well… he’d never touch this story. It’s too full of the sort of gritty realism that never made it into his well-scrubbed coming-of-age films.

Wivenhoe Park wrenched me back to a mid-80s Britain where punk was dead and alternative/goth ruled. If birds, booze and Bunnymen are your thing, as they are mine, then dust off your Sisters of Mercy LPs, squeeze into your Meat Is Murder t-shirt and enjoy the ride.